Types of Crankbaits and the Differences Between Them 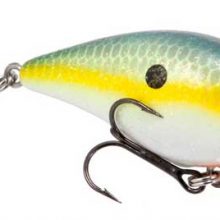 For most anglers a crankbait is a crankbait and they pay very little attention to the different types of crankbaits and how and when you should be using them.

Crankbaits are one of the most effective lures an angler can have in his arsenal.

They can produce a bite at any time of the year when used properly and fishermen who understand the differences and advantages of each type of crankbait can have much greater success than others.

However, crankbait fishing for bass is not as simple as just throwing a lure out and winding it back in. Understanding each type of crankbait and just when and where it will work is key to having success with these specific lures that other anglers might overlook.

Choosing the right crankbait rod is also important as they tend to fish better when using a more moderate action rather than a fast one.

One of the biggest advantages to using crankbaits is that anglers can cover large expanses of water. Crankbaits also allow fishermen to explore variable depths to target fish at a specific location.

Crankbaits are produced in every kind of shape, size and color you can imagine, but we want to take a closer look at 5 of the most commonly-used crankbaits in order to help anglers better understand the differences in each type, and also to know when and where to use them to fill their bag.

One of the most versatile kinds of crankbaits on the market today are lipless crankbaits. While they are also known as “rattle traps” or other nicknames, lipless crankbaits do not feature the standard bill or lip on the front of the lure which usually manipulates the natural buoyancy of the bait.

The lack of this lip allows this lure to be fished at just about any depth you want, which can be accomplished by letting it sink to the desired level.

A lipless crankbait will produce a telltale “wobble” when retrieved and the faster an angler reels the bait in, the more rapid your crankbait will wobble back and forth.

This “wobble” is one of the main reasons fish are attracted to a lipless crank. Most manufacturers will insert a weighted ball inside the lure to produce a methodical vibration that catches the attention of nearby game fish.

Anglers can vary their retrieve to be slow and steady, or quick and sporadic depending on what fish are inclined to bite based on a specific pattern.

A deep diving crankbait will normally have a larger, more pronounced bill which will cause the lure to “dive” to greater depths than it naturally would. Deep divers are great for targeting bass that hang out near ledges, mounds, drop offs, or deep channels.

After largemouth bass have spawned, many of them will generally return to the depths of their given lake or waterway to suspend at a comfortable depth and hunt for bait fish.

Since crankbaits mimic a bait fish like shad, it is very important to understand when and where bass will be searching for shad and how to replicate the natural activity of their prey.

During the hot summer months, bass can be found at depths of 20 feet or more.

A deep diving crankbait has the ability to reach the depth where larger bass are located and—depending on their preference of size, shape and color—can entice them to attack and bite the lure.

Be sure to cast beyond your target point to allow your deep diver to reach the desired depth before arriving to the point where you expect fish to be staging or holding to cover.

When the water temperature in the shallows cools to a certain degree, bass tend to rise from the depths and hunt for bait fish in the shallows around points and in coves.

While it may seem logical to avoid structure such as brush, stumps or other types of cover with a crankbait, seasoned anglers recommend trying to retrieve a shallow diver in such a way as to “bump” into stumps and other structures.

Doing so will usually cause a realistic-looking “flash” that has the same appearance as a bait fish swimming around cover.

Be sure to use a heavier line when throwing a shallow diving crankbait as you’ll likely be running into a good bit of stumps, limbs and other obstacles that can sometimes nick the line and create weak spots that can break.

For a comparison of other shallow running lures check out our other article crankbaits vs jerkbaits.

Jointed crankbaits, also known as “broken back” cranks, have at least one or more joints to create a more rapid action that causes the lure to give the illusion of moving more rapidly than it actually is.

Jointed crankbaits usually have a small lip, but some versions of this bait can be lipless. In the past decade, jointed baits have evolved into their own realm of new lures known as “swim baits.”

The most effective method of fishing a jointed crankbait is to employ a slow retrieve that will highlight the extra action of the crankbait.

Using a slow, steady retrieve with a jointed crankbait in an area that is heavily-fished can sometimes result in catching large bass that can spot a standard crankbait from a mile away.

Perhaps one of the most useful crankbaits on our list is the suspending crankbait. The main advantage of these kinds of lures is that your crankbait is held in the strike zone for a longer period of time without sinking or floating out of range.

Suspending crankbaits are specially designed to have neutral buoyancy and will remain at the given depth when an angler stops their retrieve.

This suspending crankbait is designed to give the appearance of a bait fish freezing in place in order to avoid detection from larger predators like largemouth bass and other game fish.

Many times, when a fish follows a suspending crankbait and notices that the lure “stops,” it will entice the fish to take advantage of what seems like unsuspecting prey and strike.

Suspending crankbaits can also be jerked erratically to simulate a bait fish darting through the water in an effort to avoid being eaten by larger fish.

Suspending crankbaits are a great choice for days when fish are sluggish or not in the mood to chase their prey very far. Most of the time, a fish will strike after you’ve paused your bait and begin to retrieve once again.