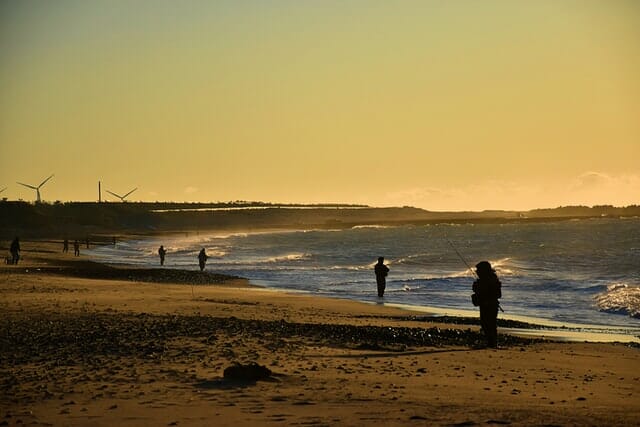 Pompano are one of the most unique types of game fish species that are commonly targeted by anglers. These fish can be found anywhere from the coasts surrounding The United States all the way southward to Brazil and everywhere in between.

They have a reputation for being exceptionally fun to catch and are also some of the best tasting fish that can be caught from the surf and other coastal areas.

These fish are generally nowhere near as long as some of the other types of saltwater game fish that can grow to massive lengths and often exceed 100 pounds in some cases.

However, anglers who are particularly well-versed in fishing for and catching pompano will attest to the fact that this species is one that is exceptionally tough and built for speed and power, despite its stocky build.

In this article, we will cover some of the most important aspects of surf fishing for pompano and ensure that beginner and novice anglers who may not be very familiar with this type of fish have a decent head-start on their next outing when they might catch a few pompano.

Pompano are very easily recognized as they feature some of the most unique characteristics of any other game fish species that can be found along coastal areas near the United States.

Their body is somewhat short, but very wide and thick, which makes them able to swim with significant quickness. Experienced anglers are usually aware of the fact that they’ve hooked a pompano simply by the manner with which the fish begins pulling shortly after it has been hooked.

A trophy pompano might not be quite as large as you might expect compared to some of the more popular saltwater game fish species. The world record pompano is listed as being just 8.4 pounds, according to the record books.

If you’ve never eaten a freshly-caught pompano, it’s a dish that you should definitely plan on trying sooner rather than later as most saltwater anglers agree that these particular fish are considered to be the best-tasting of any saltwater fish species that can be caught around the North American coastline.

As with most other saltwater game fish species, there are certain times of the year that are much more productive when it comes to fishing for pompano.

These types of fish are known to congregate in large schools and are often seen migrating many hundreds or thousands of miles from warmer climates during the winter months.

As the weather begins to heat up during the early spring, pompano will school up once again and make their way northward, generally reaching as far north as the coast along Massachusetts along the United States East Coast.

This special time of year when pompano are known to migrate in very large schools can be especially exciting for anglers along the coast of Florida as they can experience massive numbers of these fish passing by as they make their way out to other areas of the Gulf of Mexico and upward along the Atlantic coast. This is generally referred to as the ‘pompano run’ and usually occurs at a specific time in each general area once per year.

Anglers will usually attempt to time this pompano run in certain locations during the spring and once again in the fall when these fish prepare to return to the waters around the tropical islands to the south.

During these runs, pompano can be caught in large numbers with relative ease, making them especially popular with young anglers and anyone looking to catch something that can be prepared into a tasty dinner.

When to Catch Pompano in the Surf

If you’re hoping to catch the pompano run at your local beach, or anywhere in particular, it’s highly important that you pay attention to one, single aspect—water temperature. This is a typical indicator of the migratory behavior of various types of fish species and holds true for pompano as well.

Most skilled anglers who consistently time the pompano run each year report that it’s best to start expecting these fish to make their annual pass through a certain area once the water temperature reaches approximately 62 degrees Fahrenheit. Some areas will see an influx of pompano once the water temperature climbs a bit higher to about 65 degrees.

According to anglers who are especially skilled when it comes to timing the pompano run and catching their limit of these popular game fish species, 68 degrees is the magic number to look for. Since you’re going to be fishing from the beach, the best time to target pompano in your particular area will be when the tide is shifting.

You’re much more likely to have better luck when surf fishing for pompano when the water isn’t necessarily rough. It’s usually good to have a small amount of wave action in order to cause the bottom to be stirred up a bit, which allows pompano to more easily locate their favorite types of prey.

Most anglers prefer to target pompano off their local piers when the annual pompano runs begin, but you can also have good success fishing in the surf as well.

Unlike other fish species that are commonly targeted along the coastline of the United States and the Carribean, pompano are not known to congregate around underwater structure.

It’s important to remember that pompano are not ambush predators, but will be best served in a large school where they can cruise along the shoreline and hunt in large numbers. You can usually target pompano from the surf by casting out into the section of water where the waves are breaking at least 20 yards offshore.

Best Rigs for Catching Pompano in the Surf

Most skilled anglers recommend using a general setup for targeting pompano that is commonly used to catch a wide variety of different species along the surf.

It’s best to use a pyramid sinker that is roughly 1 to 4 ounces in weight at the bottom of your main line. You can then rig one or two 1/0 circle hooks using a swivel and leader line from the main line.

Many stores and bait shops will often sell leaders that are specially-rigged for pompano. These usually work very well, but it’s going to be up to you as to the best approach you’ll need to use. This can only be properly determined after a few outings in which you are fishing specifically for pompano.

It’s recommended to use multiple surf fishing rods that are set up at different intervals away from the shoreline. This will allow you to gain a better understanding as to the exact distance from shore that pompano are looking for meals in the sand.

The best fishing surf baits for pompano are always going to be any type of crustacean as this is their main source of food. Most anglers have great success using sand fleas or various types of crabs, which can be rigged in a variety of ways to target pompano.

You can always maximize your potential for success by using two hooks per rod, as well as multiple rods in the water at the same time.

When it comes to figuring out just what pompano wants to bite, you really can’t go wrong in using sand fleas, Fishbites, or shrimp. Once you catch one pompano, you can rest assured that there are more nearby in the same general area.

There is truly nothing like having a successful day of surf fishing for pompano as you’re likely to catch dozens of fish and can also return home with plenty of fillets and prepare them to your liking for a tasteful dinner.