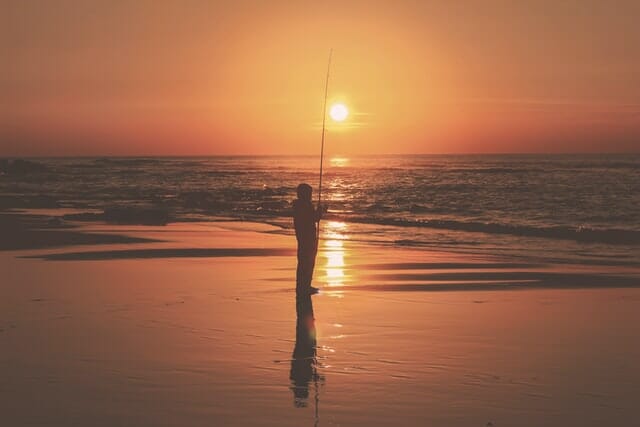 Flounder are one of the most popular types of saltwater fish species around the North American coastline. They are certainly not the most attractive fish in the ocean, but it’s truly hard to match the excitement of catching them along the shoreline in many coastal areas.

Plus, flounder make excellent table fare, so a few fish are more than enough to serve as a decent dinner after a long day spent fishing on the beach.

Anglers in a boat have a significant advantage when it comes to fishing for flounder, also known as ‘fluke,’ as they are able to cruise around and pinpoint areas where flounder have left ‘tracks’ or imprints in the sandy bottom along most inlets and shoreline areas.

However, anyone who finds themselves surf fishing for flounder can’t always get the right angle that allows them to see these tracks.

Regardless of the advantages and disadvantages compared to fishing from a boat vs surf fishing for flounder, anglers can be quite successful when trying to catch these fish species from the shore.

In this article, we’ll cover some of the most important points when it comes to surf fishing for flounder and take a closer look at some of the keys that will help you find success along your favorite beaches.

Best Time to Catch Flounder in the Surf

Like most other fish species that roam the salty surf along the coast of most places in North America, flounder will be more prevalent during certain months out of the year. In most areas, flounder are known to migrate far offshore during the cold weather months of late fall and winter.

During this time, they will go through their annual spawning routine in the deeper waters before gradually making their way back into the shallow areas once the weather begins to heat up once again.

In many areas, flounder fishing can be quite productive throughout the entire year as anglers have perfected the art of targeting flounder in deep water off the coast, as well as close to the shoreline. However, when it comes to surf fishing for flounder, you won’t have much success until the water heats up to around 70 degrees in most areas.

The months of spring and summer are widely considered to be the best time of the year for surf fishing for flounder. This is mostly due to the fact that flounder will hang out in areas that are very close to the water’s edge in many cases.

In most places around the American coast, flounder will begin being caught in April and the success rate of anyone trying to catch flounder from the surf will become better and better as the weather gets hotter.

During the late spring and early summer months, anglers can use a variety of techniques to catch flounder just a few feet into the surf along beaches throughout the country.

When it comes to catching flounder in and around areas where the waves are breaking and the surf is rolling in, anglers don’t have the unique advantage of being able to visibly see just where these fish are lurking on the sandy bottom. Flounder are well-known for their special ambush style of hunting for prey.

They are one of the only fish that can be found along coastal areas that burrow down a few inches into the sandy bottom along the surf and lie in wait for certain types of bait fish or other prey to swim by and become an easy meal.

This technique works out very well for flounder as they have a brown coloration that makes them virtually impossible to distinguish from the sandy bottom around them.

In many cases, flounder can only be seen when someone steps on or very near their position, or if the water is calm enough for the person to see the faint outline of the fish on the bottom.

Flounder are commonly known to burrow down into murky bottomed areas around inlets and flats, but can also be found in good numbers along the shoreline of most beaches.

For anglers who want to focus solely on surf fishing for flounder and trying to catch them among the waves, there are some specific techniques they will want to pay attention to in order to be successful.

How to Catch Flounder in the Surf

Anglers who want to catch flounder in the waves along their local beaches should be ready to cast aside all the usual practices that go along with surf fishing.

Instead of sitting in one single location and using rod holders and chairs, it’s recommended that you cover as much ground as you feel comfortable with since it’s very difficult to pinpoint just where you’ll find these fish borrowed down into the sand and they are not going to move around as much as other fish species will.

Many anglers will use a smaller-sized surf rod and reel that one might expect to be used when fishing for various types of sea trout, or other small game fish species.

You won’t need to focus on casting your lure out to a considerable distance in the same way you would when surf fishing for other fish species. Flounder are most often caught just a few feet from where the water’s edge laps the beach as the waves roll in.

Many anglers only cast their lures out about 20 feet into the surf and slowly work them inward toward the beach.

Best Rig for Flounder in the Surf

Most anglers will use any type of lure that closely resembles a shrimp as this is one of the flounder’s favorite meals. It’s fine to use a real shrimp, but be aware that most fish will easily pull these off the hook, which means you’ll have to continually put a fresh shrimp on the hook as your fish along the shoreline.

Many anglers prefer to use a rig that features a bucktail jig with a small plastic shrimp imitation lure tied about one foot above this bucktail, which acts like a sinker and helps keep your lure from being moved around in the surf. Toss the rig out about 20 feet from the water’s edge since you won’t likely catch many flounders very far off the edge of the surf.

Don’t retrieve the lure too quickly. It’s best to slowly bounce the rig along, working it slowly as you reel at just a fraction of the rate you normally would when reeling in a normal artificial lure.

You want to probe the bottom and try to locate a flounder that is sitting on the bottom, waiting for a potential meal to come within striking distance. This means you’ll have to thoroughly fish each area you cast in so that you don’t end up missing any fish that might want to wait until something comes very close to their position.

Many anglers also have success using a variety of shad or cut bait varieties which they work along the surf much like they would with any other type of lure. Flounder are not likely to be swimming around and chasing after their prey, but rather will sit and wait on something to come within range.

When it comes to feeling a flounder bite, you won’t necessarily feel much of a ‘thump’ on the end of your line in the same way you would with other species. Instead, be aware of any weight that seems to pull on the line as this is likely a flounder biting your lure.

It’s also important to let the flounder have about 5 to 10 seconds to ‘chew’ on the lure in order to become well-hooked. At this point, you can begin to reel in your catch.

Try flounder fishing in the morning as they will naturally be more active in the calm surf and low light conditions. Be sure to work an area thoroughly and don’t move along too quickly.

Flounder fishing is all about probing the area well enough to elicit bites out of any fish waiting to strike. With these tips, you should be well on your way to catching a few of these popular game fish species along the next beach you visit this spring or summer.