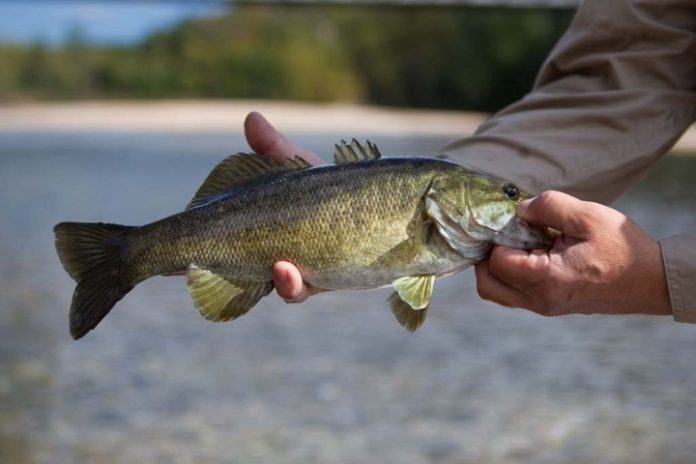 Black Bass fishing is still the most the most popular species to fish for in the United States.

For a lot of anglers experience and a keen eye is all they need to tell them which type of bass they have hooked.

There are a number of subtle differences and once you learn to spot them you really should have no trouble telling them apart.

You can generally use your regular gear and tackle but the major difference is where and how you fish your smallmouth bass lures if you are targetting them instead of largemouth.

What's the Difference Between Large and Smallmouth Bass ?

The main differences between large and smallmouth bass are that largemouth have a longer jaw, a notch between their dorsal fins and the have a greener body with horizontal lines.

Smallmouth however have a shorter jaw that starts forward of the eyes, no notch between dorsal fins and they have vertical stripes and a somewhat browner coloration on their body.

Both largemouth and smallmouth bass are members of the black bass species which below to the genus of fish that make up the Centrarchidae or sunfish family of freshwater fish that are native to the United States.

How to Identify a Largemouth Bass

Large mouth tend to grow larger than smallmouth. They have a deep notch between both dorsal fins on their back which is one of the quickest and most reliable ways to tell them apart.

As their name suggest the start of their jaw starts much further back on their head which results in a much bigger mouth by volume.

An easy way to judge this is to drop an imaginary vertical line from the eyeball, and if the socket of the jaw is behind this line then chances are you have a largemouth bass and not a smallmouth.

They will commonly be green in color with horizontal lines that run along the top of their body to help camouflage them in and around weed beds.

How to Identify a Smallmouth Bass

Smallmouth are definitely the smaller of the two species especially in larger lakes where largemouth can thrive and reach their maximum growth potential.

On smaller waters that can't support trophy fish there may not be mush of a difference in size of a fully grown adult.

The quickest way to identify them is that the have a small gap between their dorsal fins on the top of their body.

The jaw socket will start forward of the eye socket.

Appearance wise they will normally have a more brown hue to their body and will have vertical lines along their side.

The brown color is better camouflage out in more open water across a rocky or more gravel like bottom.