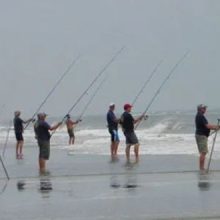 If you've just started out fishing from a beach then you may well have seen other angler either using or talking about shock leaders for surf fishing.

For the beginner they can seem a little daunting but in reality they are pretty simple and once you get your head around the concept then you'll realize there is no that much too them.

If you want to reduce the likely-hood of your terminal tackle breaking off during heavy casting then a shock leader is almost a must have.

Surf fishing is sometimes a game of distance. An angler must cast their lure as hard as possible to get it out past the breaking waves where fish will have a better chance at seeing the bait and taking a bite.

However, sometimes when anglers attempt to cast their lures out very far, their lines simply can’t hold up to the immediate strain that the large hook, bait and heavy weight can put on the line.

To avoid snapping their line during a hard cast—or a fight with a large fish—anglers use shock leaders for surf casting.

What is a shock leader?

A shock leader is a heavier length of line that reduces the chances of your terminal tackle breaking off during casting.

Shock leaders are usually made from heavy monofilament line typically being at least 50 pound test and sometimes up to 300 pound test.

Monofilament line is the ideal material for a shock leader as it is constructed from one continuous strand of fiber, which gives it added stretchability and strength compared to other kinds of line like fluorocarbon or braided line.

Plus, monofilament is tougher than other kinds of line and will withstand any potential abrasions that can lead to a broken line.

Some anglers can make their own shock leaders for surf fishing by using heavier line and tying both strands together using what’s known as a shock leader knot.

It is usually recommended that anglers use slightly more than two rod lengths for their shock leaders, or at least 27-30 feet of line.

How do shock leaders work?

A shock leader works by having a very strong length of leader that can withstand the high pressure that surf casting puts on you line during the initial cast.

Anyone who is a surf fishing guru will likely be using a 12 to 15 foot surf fishing rod in order to cast their bait as far as possible. If you’ve ever watched a surf fishing angler cast their rod, you’ve probably noticed that they usually heave it with everything they have.

This sudden, immediate cast puts a significant amount of centrifugal force on the line, which would typically break under such pressure as most lines simply can’t hold up under the strain. Shock leaders provide added strength that will allow the angler to apply as much pressure as they want when casting.

How strong should my shock leader be?

The strength, or pound test, of your shock leader should be determined by the weight of your entire rig, which will include the hook, bait, swivel and sinker. According to most experts, shock leaders for surf fishing should be at least 10 pounds in weight for every one ounce of rigging.

As a good rule of thumb, it’s best to start out with a 50 pound leader and increase the pound test rating depending on the size and weight of your rig and surf fishing bait.

What if I have to change my shock leader on the beach?

When surf fishing, you might find that the waves and current can quickly become much stronger in just a matter of a few hours.

If you’re fishing in the surf and find that your sinker is not heavy enough to sufficiently keep your bait in place, and keeps getting pulled away, then it’s time to add a heavier sinker.

Be careful when adding a heavier sinker because you can easily overload your shock leader and have a disastrous result of your line snapping mid-cast, which can seriously injure anyone nearby, including yourself.

It’s often a good idea to be prepared to go with a heavier shock leader and pack some heavier monofilament line in your tackle gear.

Instead of taking the time to remove the shock leader you already have on your rod, many anglers will simply tie another shock leader onto the end of the existing one that’s already on the line. This will save you time and ensure that your rod’s line won’t snap with any added weight.

Shock leaders are not only used for surf fishing, but are also used by deep sea anglers who are many miles offshore and sometimes fishing for giant trophy game fish.

They are the secret for allowing surf fishing anglers to go after for huge game fish species like sharks and bull redfish from the shoreline.

Learning to use one from the start is one of the best surf fishing tips I ever got.

While some anglers prefer to use heavier braided line when surf fishing, shock leaders allow you to typically throw your bait much farther, feel the bite with more sensitivity and your line will be much more camouflaged underwater.

For your next surf fishing trip, even if you’re going after relatively small game fish like flounder, pompano or other species, it’s a good idea to use a shock leader that will ensure that you’ll help prevent breaks in your line and that you’ll be able to really cast the maximum distance your rod is capable of throwing a bait.