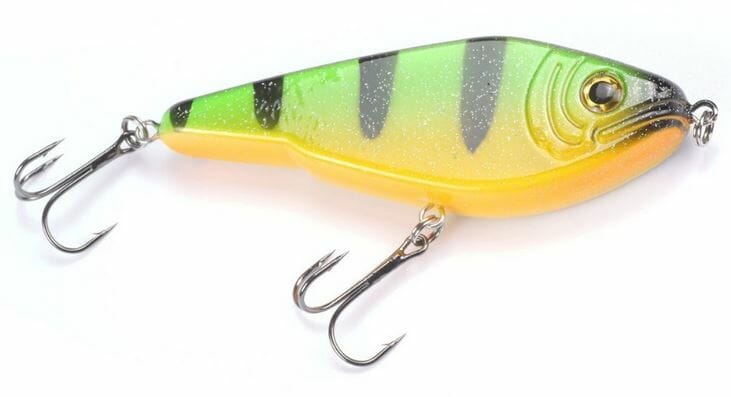 Take a look inside the tackle box of almost any angler and you’re likely to find a variety of crankbaits and jerkbaits.

While these two lures probably appear to be very similar to the novice outdoorsman, they have some striking differences and unique advantages when used at the right time.

Crankbaits have been around for more than 100 years. The first crankbait was invented around 1915, but the bait’s overall composition hasn’t changed much.

The jerkbait was first developed just a few decades later by legendary angler Lauri Rapala and has also remained largely the same as its early designs.

Both the jerkbait and the crankbait are crafted to mimic the appearance of bait fish, but there are some very specific differences that will often make one lure a great deal more effective than the other at any given time.

Knowing how to take advantage of these differences means catching more fish.

Both baits utilize the highly effective treble hook because fish are known to strike at these two kinds of lure from every angle.

Crankbaits are designed with two treble hooks while jerkbaits typically have three treble hooks that are slightly smaller than those found on cranks.

The two types of lures were originally made from balsa wood, but modern manufacturers have opted for a hard plastic construction that is more durable.

Decades ago, it was common knowledge that crankbaits were made to “dive” down into the depths and jerkbaits were usually considered a shallow water lure.

Advancements in designs have led companies to create different types of crankbaits for all depths, including models that will suspend at a given depth.

Some jerkbaits are specially weighted to sink to the bottom before being retrieved.

Most jerkbaits will run more shallow than your usual crankbait simply because of its overall shape.

Having an understanding of exactly how deep—or shallow—a lure will run is an important part of being able to properly use each type of bait.

Jerkbaits are all designed with a shorter, smaller lip on the front of the lure while crankbaits feature a variety of different lip sizes and shapes.

The small bill on a jerkbait is what allows the lure to have the telltale “darting” motion that sets it apart from other baits.

A crankbait’s appearance normally indicates how deep it will dive as a lure with a more downward-turning bill will cause the bait to swim down at a sharper angle.

Square bill crankbaits have become wildly popular in recent years and have some aspects that make them more desirable than the traditional round bill design, depending on a particular circumstance.

Round bill cranks will dive faster and swim straighter than square bills, making them ideal for deep water that lacks structure.

Square billed crankbaits, however, have a more pronounced “wobble” and ability to move through cover without becoming snagged.

The types of hooks on each kind of lure might seem insignificant, but each bait is specially designed with hooks at a specific point in order to provide proper balance.

Many anglers often swap out the standard stock hooks that come with most lures and rig them with better quality treble hooks.

Be careful in doing this as the slightest deviation in hook weight can cause the lure’s overall action to be changed in both jerkbaits and crankbaits.

Unfortunately, you can’t just throw both crankbaits or jerkbaits on the same rod setup and produce ideal results.

Seasoned anglers know that they need a specially rigged rod and reel setup for crankbaits, as well as another one geared to throw jerkbaits.

The most critical difference in rod selection for these two lures is to make sure you’re using a fast-action rod for jerkbaits and a heavier crankbait rod. Having a faster action rod is crucial to producing the right amount of twitching or darting motion that makes jerkbaits so effective.

Having the right kind of fishing line is also a major component to properly using each kind of lure.

Monofilament is favored as a line for crankbaits because it allows for a slight amount of stretching in the line which helps create the smooth action you want, especially deep down.

Stretching will have the opposite effect on jerkbaits because it will lessen the lure’s ability to quickly change direction.

Fluorocarbon is more suited for jerkbaits and the line’s ability to blend in with the water is an added bonus when fishing in clear water.

Both crankbaits and jerkbaits have their own particular uses depending on the time of year and how active the fish are behaving.

Jerkbaits are always a solid choice during the colder months because the erratic, twitching motion can arouse a fish’s predatory instincts, even when they have become more sluggish due to the low water temperature.

Anglers can have success at any time of the year with a jerkbait, especially when using them to fish main lakes and secondary points near rock bluffs or drop offs.

Crankbaits are ideal for deeper water in most cases and can attract bites during the cold or hot weather as fish will often take refuge in the depths of a given waterway.

Square bill crankbaits are a great choice for crankbait fishing in conditions with water temperature above 50 degrees.

The key for getting the most out of your crankbaits is using a lure that is certain to reach the bottom. The crankbait’s disruptive action along the bottom and ability to bounce away from structure are what really sets the lure apart.

Both crankbaits and jerkbaits are among the most productive lures available to anglers. Neither one has a clear edge on the other and the most successful fishermen know that true success comes from experimenting with and learning how, when and where to use each lure.