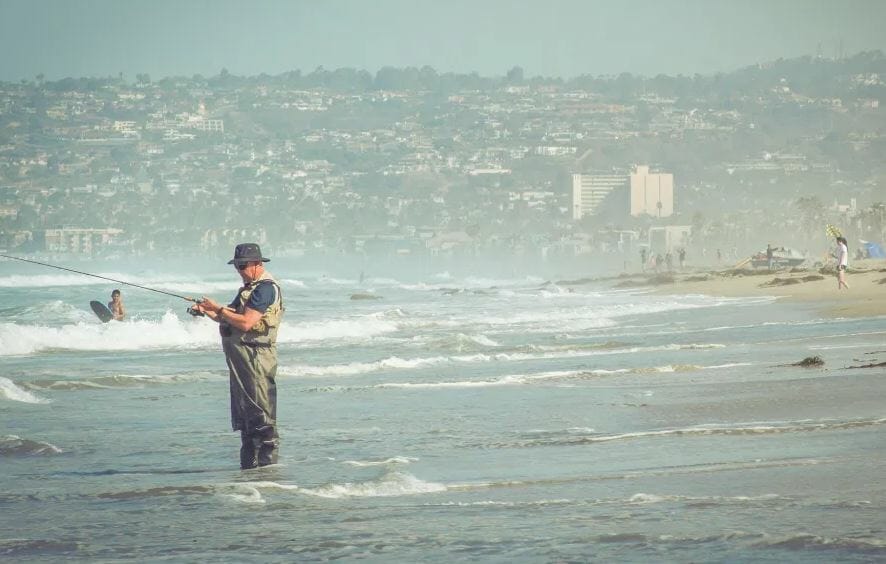 Surf fishing should be on every angler’s bucket list to do at least once in their lifetime.

Odds are that, once you actually go surf fishing, you’ll develop a healthy appetite for it and will already be planning your return trip before you even leave the beach.

While there are untold miles of coastline throughout the world, much of the tips you’ll come across for the best surf fishing baits to use are relatively the same and any other part of the world.

The key is to keep in mind what the specific game species of fish you’re after will be seeking when they’re swimming along the coastline.

Surf fishing is preferred by the average angler, particularly those who don’t wish to spend thousands of dollars on their own boat, or shell out several hundred for a private fishing charter.

Investing in the best surf fishing rod you can afford is probably the most important thing to get right from the start as with surf fishing casting is crucial.

In many ways, surf fishing is the true test of an anglers because it forces you to be very limited as to where you can fish, and also makes you rely on your naturally occurring surroundings that are always changing with the tides.

Choosing the best bait is key to catching fish as they are most likely to bite on some kind of natural bait that they are used to eating regularly.

In order to become a true surf fishing guru, you’ll need to have several years under your belt fishing from the coastline, but you can always use these six tips for the best surf fishing baits to get a head start on other anglers.

It’s actually quite simple to catch your own sand fleas from the area you’re fishing in. Don’t worry, they can’t actually bite or pinch you so, you shouldn’t be scared to go after them when they try to quickly burrow into the sand and hide.

Shrimp are perhaps the best all-around, all-purpose bait for surf fishing, or fishing anywhere in saltwater for that matter. They can be found nearly everywhere there’s coastline and fish love to make an easy meal out of them.

Sometimes, using dead shrimp for bait is acceptable, but there are other occasions when using live shrimp is your best bet for catching fish in the surf. Shrimp are a great bait choice for tarpon, snapper, grouper and many other game fish species you’ll find swimming along the coastal shoreline.

The only drawback to fishing live shrimp is their inability to stay on the hook as long as other types of bait.

One of the best surf fishing baits, especially if you’re going after striped bass, is menhaden. These small bait fish are ideal for cutting into small sections and placing on your hook to catch a giant fish in the surf.

Fishing in the surf using menhaden cut bait is like throwing a t-bone steak in the water. Fish will often go out of their way to bit a nice chunk of menhaden.

This kind of bait can also be tough to keep on a hook as some types of fish will effectively pull it off your hook and you’ll be stuck fishing on credit.

If you’re using cut menhaden, be sure to hook it through the portion of skin just at the top of the back so that your hook passes under the fish’s spine, which will provide added support and prevent your bait from being stolen.

For many novice anglers, using squid as bait might sound like a stereotypical joke that older anglers play on newcomers.

However, squid are one of the best surf fishing baits you can opt for because they’ll stay on the hook much longer than other kinds of bait.

Squid is a great choice of bait for surf fishing because it’s cheap and readily available almost anywhere you’ll be going fishing.

You might end up getting ink on your hands, but don’t worry this is a good thing to have on your squid. The more ink that’s on your bait, the most strongly it will smell to any fish in the area.

Squid are also known for putting out lots of scent in the water, which will attract any nearby fish to come in and investigate.

This is a solid choice of bait, but if other anglers in the area are always using it, odds are that the fish along the coast have grown to become suspicious of anything resembling a squid. Nevertheless, it’s an easy addition to our list of the best baits for surf fishing.

Many bait shops sell frozen clams, but as usual, you’re much better off going out and catching your own bait to ensure that it’s as fresh as possible.

While there are many different ways to catch and find clams, there are some great online resources that detail the most effective methods for catching your own clams.

Clams are also notorious for coming off the hook easily, so it’s very important to hook them the right way, every single time. You can also find specific netting or clam line and tie the clam onto your hook to ensure that it won’t be easily stolen.

Crabs are another great choice of bait for anyone looking to catch fish in the surf. Blue crabs are usually considered the best and we could have lumped these in with sand fleas, but we chose not to.

Crabs might not seem like the ideal bait for surf fishing since their body is hard and they’re armed with large pinchers, but they actually are very effective. The smartest method for crab fishing is to catch your own crabs and use them right where you found them.

Many anglers will venture out to the beach the night before their fishing trip and catch as many crabs as they think they’ll need for the following day. Be sure to hook the crab through it’s underside and run the hook back through the hard shell on top.

This will make it very tough for any fish to steal the crab off your hook, and will increase your changes of catching fish as most species of game fish will choose to bit the crab at it’s back end and go after the eggs.

When fishing with bait you will be using a variety of surf fishing rigs depending on the type of bottom and how large a bait you are using. A large bait and sinker will require the use of a heavy shock leader for surf fishing.

As a general rule surf fishing tackle will generally require a good setup that can cast well out past the waves and over any potential sand bars.